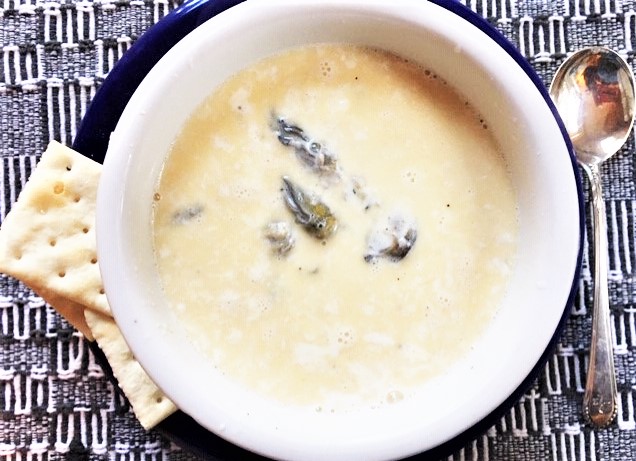 All along the southern east coast and the Gulf coast, you could find them if you traveled the back roads— just a bit inland from the water.  Low, long, white-painted buildings, set back a little from the road, with maybe a smallish sign indicating “home cooked food”, “fresh caught seafood”, or just “restaurant”.  Often family-run, they’ve been disappearing as families have dispersed—so if you see one and you’re hungry, you might want to give it a try.

These are the places where regional cooking was the real thing—old family recipes, shellfish delivered in baskets from the watermen, fresh greens from the fields, and home baked fruit pies.  Gone but not forgotten, is the first place I ever tasted oyster stew.  I noted that a short freight train was stopped on the single line track across the four-lane—and found the crew inside for supper.  The place was crowded and steamy on a cold winter evening.  And almost every table had at least one thick white bowl brimming with a creamy soup, melting butter swimming on top and oysters poking up through the surface—didn’t even have to look at the menu.  The recipe was generously shared, and told that it was the community’s traditional Christmas Eve supper.  This story is way longer than the simple, easy recipe—serves 4.

Put milk/cream mixture, salt, pepper and nutmeg in saucepan— heat on low, stirring occasionally, until it gently simmers.  DO NOT BOIL.  Simmer for about 10 minutes to slightly reduce liquid.  In skillet over low heat, melt butter ‘til it starts to gently bubble.  Add oysters and liquor—cook ‘til oysters just begin to curl at the edges.  Transfer oysters and butter to pan of heated milk and cook for 2-3 more minutes.  Divide into 4 bowls and top each with small pat of butter.  Done! 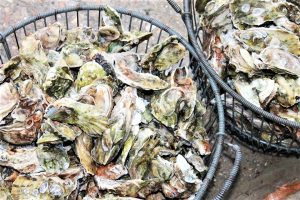