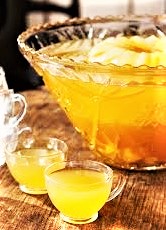 Down the mid-Atlantic coast, tucked in the back of many community and church cookbooks, under “Beverages, Miscellaneous”, there’s a powerful strong old Colonial “receipt” called Fish House Punch. Down our way it’s on page 81 of the church cookbook, and dated 1732. Reported to be from a gentleman’s social club near Philadelphia, ingredients are remarkably consistent among recipes—although the further south, the more alcohol and sugar! Attesting to its potency is the back story about the 3-day absence of diary entries by George Washington, after an evening of 13 victory toasts at Fraunces Tavern in New York. A very large punch bowl, and an equally large block of ice, are required.

Mix very well until all sugar is dissolved. Store in gallon glass containers for at least a week before using. Serve over ice block and garnish with sliced lemons and oranges. 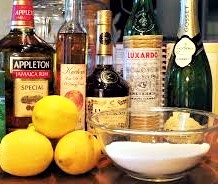