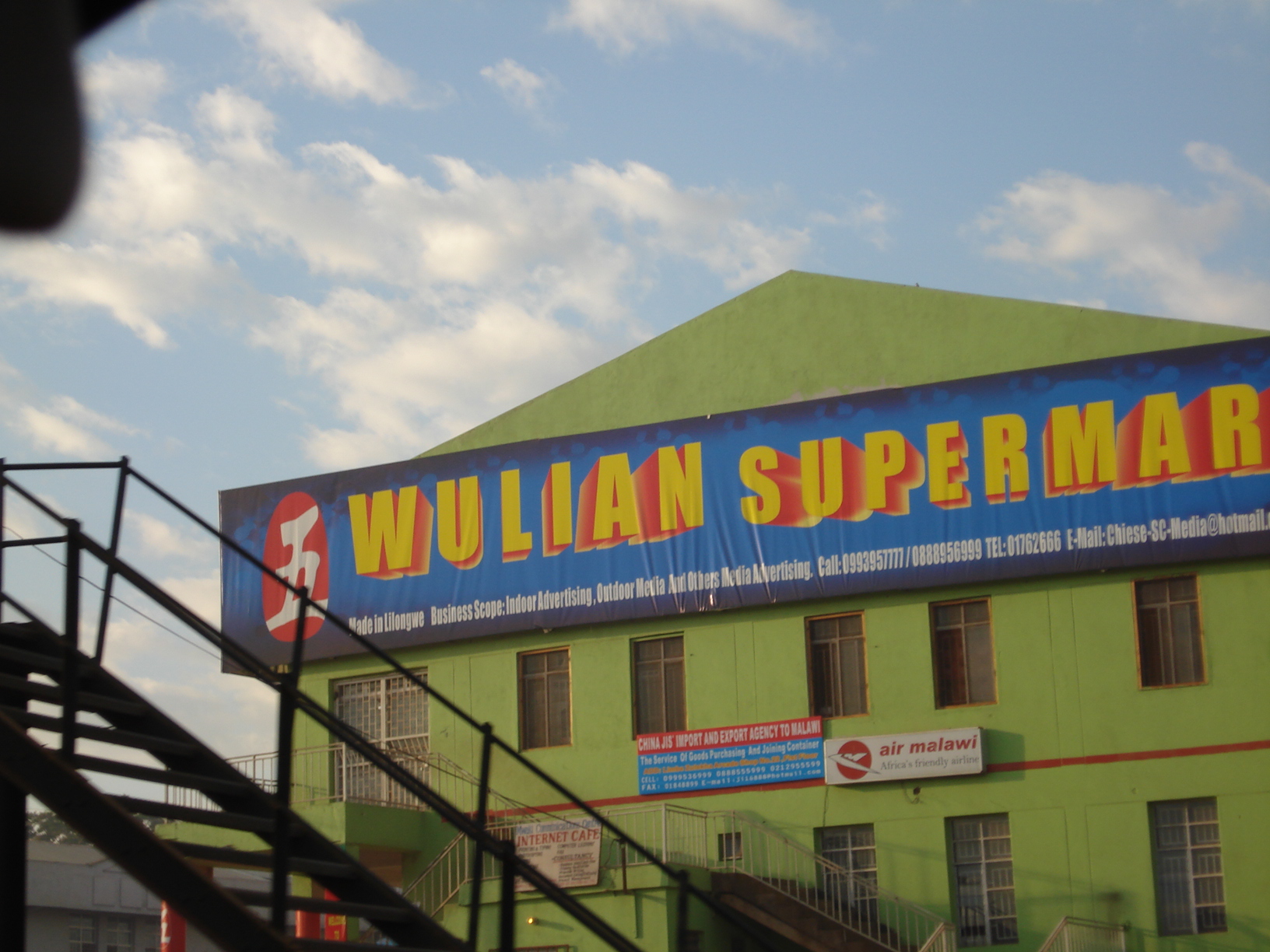 It sneaks up on you. I didn’t really notice it at first, especially since I have not seen one Chinese person since I entered Malawi. But they are everywhere. I think it really hit home when Clifford, my driver, decided to teach me Chinese to while away the hours on one of our very long drives (having given up on my linguistic ability to learn Chichewa, the language spoken by the majority of Malawians), My favorite phrase over which the two of us had an excellent chuckle: Tora! Tora!—Hurry up! Yes, that goes over well in the African context.

It was then that I started keeping my eyes open, I began to see Chinese characters on trucks and buses. I saw the Jian Ching shop along the M1 highway in one trading center that was almost too small to have a name. It wasn’t too small for Jian Ching, however, because they had done so well with the original shop that they were compelled to open a newer, bigger, more brightly colored annex at the other end of the trading center (ie, four doors down from the original). Then of course there is the enormous Wu Lian just opposite the traditional market and overlooking the highly garbage encrusted section of the Lilongwe River. It stands perched haughtily on the hill in its bile green concrete splendor dwarfing the thatched roofed market structures that scream temporary but have probably been there since long before Wu Lian.

My favorite Chinese investment, however, is the new highway to the inland port in Nsanje—Malawi’s gateway to the future! (All of the billboards featuring His Excellency the President tell me so! I digress.) Like most southern parts of any country, Nsanje currently has the reputation of being backwards and uncivilized. Perhaps sleepy may be the more diplomatic term. But, man, when that highway is done, things are going to be mighty different! The technological masterpiece is well under way. Every engineer in Malawi is working on various parts of the highway that is ruler straight, despite any deviations thrown up by nature, with numerous gullys dug under the highway at regular intervals and supported with huge cement tubes to accommodate the regular flooding that makes the soil so perfect for sugar cane, rice and bananas. It is indeed a marvel, unlike the bumpy and sinuous dirt road that parallels and sometimes crosses the hallowed highway, which begins innocuously enough with the sign: Roadworks next 84 kilometers.

Soon the super highway will connect the new inland port located on the southern most point of Nsanje on the Shire River that meanders through Mozambique to join the Zambezi River that at long last empties into the Indian Ocean and ultimate prosperity for all Malawians! Except that not that many people live in Nsanje or in adjacent Chikhwawa (don’t you just love to say that name? Chikhwawa!), which has a road that unfortunately makes the 84k of detours look (and feel) like a walk in the park. Hmmm, this does not bode well for all of those trucks laden with goods coming up from the inland port to improve daily life in south central Africa. But wait, what about that steep mountain range shooting up from the valley just ahead–the one with the single lane road where the few trucks that dare struggle both up and down (and up and down—it is a mountain range after all). Quick! Bring back those Chinese engineers to blast some tunnels right away!

NB: The Chinese are pretty much singlehandedly in charge of the telecommunications infrastructure in this fair country. Please address all complaints for my current inability to upload photos directly to them. I’ll keep trying, but for now you’ll have to bear only with my words…