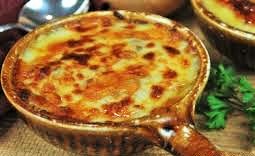 Ah, the joy of French onion soup—the aroma, the bread, the cheese. Happy memories of slipping into a Parisian bistro on a cold windy March night—sliding the heavy vestibule drapery aside, and the warmth, the bouquet, the anticipation. Ah!!

This is a pretty basic soup recipe for a make-it-yourself memory. Don’t let the “Six-hour” thing put you off—most of the time is waiting for it to finish and enjoying the cooking smells. Contrary to tradition, this recipe uses sweet onions, any broth you prefer, cubed and toasted croutons, and a choice of cheese. Tradition, on the other hand, might include a beef knuckle bone with beef broth, or a small parmigiana rind in the pot, for added flavor.

Meanwhile, cube and toast a few slices of rustic bread in melted butter in sauté pan.
Thinly shave or coarsely grate 1-2 cups Gruyere, Swiss or Jarlsberg cheese.
After about 5 hours of simmering soup, return to almost a boil, and heat oven to broil.
Add an ounce or two of cognac to soup.
Ladle soup into individual oven-proof bowls, top with toasted croutons and cover with grated cheese.
Put bowls on baking sheet and broil until golden brown and bubbling. 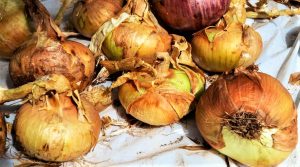