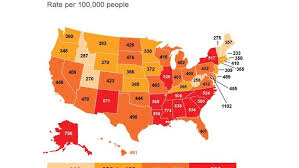 My friends, this map is not what you think it is. This is not a political map. Far from it. This map was compiled by the Centers of Disease Control and Prevention (CDC).

Last October, just before the election, the CDC came out with a report on STIs in the United States. It didn’t make big news, but maybe it should have. It turns out that newly acquired sexually transmitted infections (STIs) are at record levels. 20 million new STI cases were reported to the CDC in 2015—the most cases ever. Almost half of these were among people aged 15 to 24. Lack of knowledge, dating patterns and practices and the stigma of openly discussing sex related issues are suspected to underlie this dramatic increase in STIs.

Just so that you can bring this up at the next cocktail party you attend, the eight most common STIs in the US are:

What small act of resistance can put a HUGE dent in this catastrophe? Use a condom. Say that again! Use a condom. One more time! USE A CONDOM. You’ve forgotten how to use a condom? Check out this earlier post on Sanford Johnson–the sock condom guy.