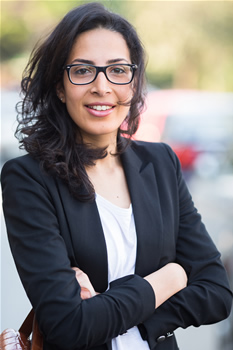 I recently attended a social research conference at the New School. As part of the conference, I saw a special screening of ‘Ladies First: Saudi Arabia’s Female Candidates.’ Mona El-Naggar’s documentary film is about the first women voters and political candidates in Saudi Arabia—ever. This piece of history occurred in December 2015. That’s a little over a year ago and women just got the vote.

Although El-Naggar is Egyptian by birth and familiar with the social mores of the middle east, she was not prepared for what she found in Saudi. To hear her tell it, both in the film and in person, she went through a transformation. She became a highly visible invisible person.

Did you know that it is illegal for a woman to drive a car in Saudi? Sure, women do it—on the sly. One of the three women candidates followed in the documentary has recently been released from prison. She was arrested for snapchatting herself driving.

I don’t think that we in the west really appreciate how different women’s lives are in many other parts of the world. Even Mona was surprised at the situation. So surprised that it became clear that her presence as a female documentarian was actually part of the story that she needed to tell.

Many of us have witnessed unbelievable things in our lives—and have had a hard time convincing people of the truth. Keep documenting and sharing what you see. Already we’ve changed the world and there is a lot more change to go.

Now sit back. Relax. And let Mona El-Naggar show you how others live, run for political office and vote.