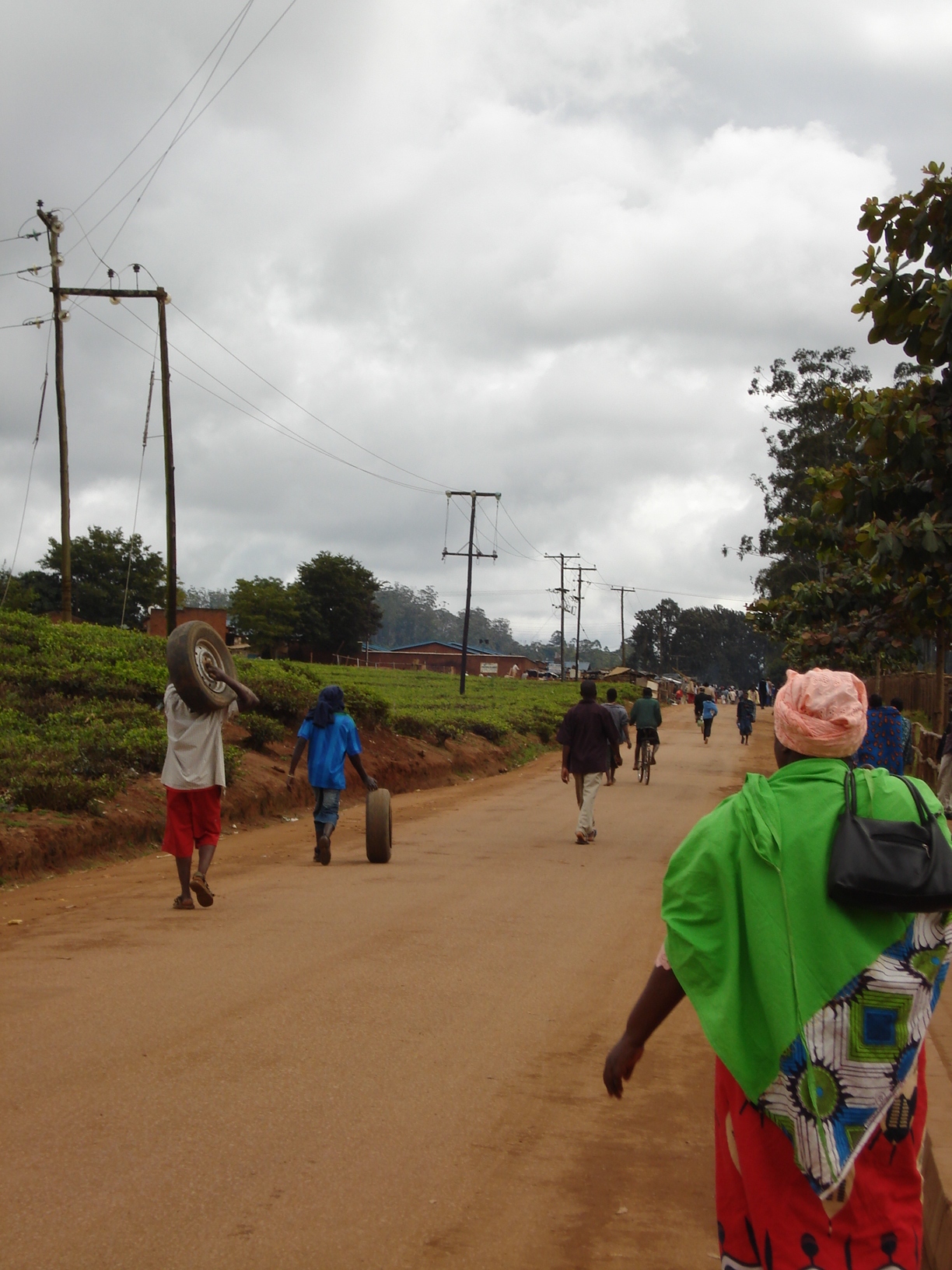 I saw my first funeral the other day, driving down from Lilongwe VERY slowly with my new, non-English speaking, non-music owning driver when a crowd of 100 people suddenly materialized on the road. The women were brightly dressed in cloth wrap skirts and matching head wraps, the women in front marching purposefully, the men in worn western dress straggling in a group behind them. The car in front of us slowed down driving through the crowd and my driver, when asked, told me it was probably a funeral. We even spotted the cemetery as a few people wandered down the hill, clearly members of the funeral party. I’ve seen many signs for coffin makers—Buy and Fly coffin makers, Heavenly Rest and yesterday on the road from Limbe to Zomba, six men were carrying an elaborately designed and lacquered coffin down the side of the road. There are occasional HIV prevention signs and I even saw a billboard for female condoms in Blantyre (the NYC and economic capital of Malawi) in this country of 20% HIV prevalence. But the clearer signs of devastation are the huge number of coffin makers and occasional signs to register children to avoid child exploitation. (I was advised that a pilot program is going on in Blantyre to have a birth registry, death registers are unthinkable at this point, though the District Health Officer in Lilongwe did try to finesse their lack of existence.)

The other thing that is plentiful are the orphanages. They are everywhere of signs for them. Yet I have never seen children hanging around these places. There are tons of schools as most of the population is under 25 (life expectancy is 41 years) and here children can be seen, but in my privileged trips around the southern part of the country, I’ve noticed that many of the schools appear to be empty.

Bicycles are everywhere. People—ok only men—ride them along the main highway, the M1. I asked my driver if there is an M2. There is not. The main roads are pretty good and filled with people and trading centers. It is rare to hit a stretch of road where there are no people. The men rid their fully laden bikes in this hilly, make that mountainous, country and they often walk them up hills, since the bikes are a major form of transporting things: wood, metal roofing, food, charcoal, you name it is strapped on to the bicycle and appears to be hanging on for dear life.

The idea of abundance. There are certainly people in abundance in this densely population country, which pretty much everyone is quick to point out is one of the poorest in Africa. It is so interesting to go to the market place to see people selling things on the side of the road. The bags, packaging or even the artfully arranged piles of food or goods are simply exploding and threatening to spill out everywhere. There is a tendency to display and to buy and sell a lot, as if that is a measure of prosperity when in all likelihood it is a measure of the lack of selling containers.

One of the standard personages I have seen at the market place is a teenage boy who carries a long stick across both shoulders on which is nailed a selection of various sized plastic bags like those from a supermarket though these are most often black or blue, while the charcoal bags are of a tough white plastic that always remains white despite the blackening contents. The charcoal is also woven into the top of the bags using pliable branches that may be some kind of palm.

There is an artistry of arranging things in beautiful yet practical ways so that nothing falls out, but it is beautiful to behold. I am in love with the fish market in Zomba. All of the fish are dried but the only ones not individually arranged are the anchovy like silver fish, though even these are often arranged so that the piles peak in the middle. None of the fish are very big and if my one sampling of the fish here is any indication, they are also very bony. My favorite fish is black—whether from being smoked and dried or naturally, I don’t know—but it has a rather prodigious tail that the fish vendors curl up into the mouths of the fish and then arrange in a series of bows to amuse shoppers passing by.

3 thoughts on “I saw my first funeral”